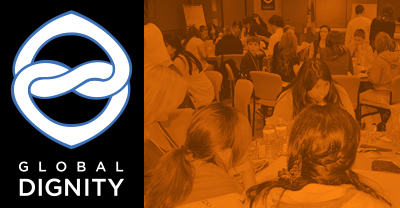 This year’s national event, hosted at Bayview Yards by Invest Ottawa, and sponsored by the Samuel Family Foundation, linked eight schools and two thousand students from the Yukon to Nova Scotia, through a live videoconference.

Highlights of today’s event included dignity stories from Caitlin Whelan an inspiring student and innovator who focuses her work on youth retention and cultural education, and Gerrit Wesselink, a young activist passionate about community building an open dialogue, particularly in Northern Ontario and Alaskan communities.

In Canada, Global Dignity is honoured with the support of Champions and Role Models of all stripes who continue to support our annual efforts, including: the Right Honourable Justin Trudeau, Prime Minister of Canada; Tom Mulcair; former Leader of the NDP; Rona Ambrose, former Leader of the Official Opposition; Elizabeth May, Leader of the Green Party; TakingITGlobal Founder Jennifer Corriero; and Inuit filmmakers Curtis Konek and Innosar Issakiark, to name a few.

Established in 2005, by HRH Crown Prince Haakon of Norway, Operation HOPE Founder, Chairman and CEO John Hope Bryant and Professor Pekka Himanen, Global Dignity is linked to the 2020 process of the World Economic Forum, in which leaders from politics, business, academia, and civil society join efforts to improve the state of the world.

Global Dignity is an independent, non-profit, non-political organization with the aim to instill a positive, inclusive and interconnected sense of value in young people that will guide them as they grow, as well as promote the idea that every human being has the universal right to lead a dignified life. Visit our website at: www.globaldignity.ca.

A livestream of the videoconference can be viewed at www.globaldignity.ca.